Recipe of the classic Italian pizza 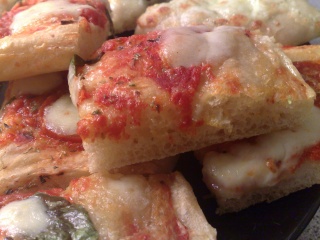 Written by tamara in English, Parents.

for 4 people or two trays

Who does not love pizza! The children for first!
As italian, I do it often and it is always a party for the kids. The prefered one is the white one.
Everybody prepares the dough in different way. This recipe is the family recipe. We often are used to prepare the dough in the evening, leave it to rise one hour in room temperature and then put in the refrigerator until the morning after and then finished the preparation for the lunch time. In this way the long rising it will give us a dough high digestibility.

At this point start to to add the flour, sift it, little by little and stiring well.

When, mixing, the dough starts to come off from the walls of the bowl, it is ready for the final stage.

At this point the dough is removed from the bowl and begin to knead thoroughly, adding flour until it no longer sticks to hands, (the result should still be soft). In this case I used about 800 grams of flour, but the amount will vary from time to time.

Now I put my dough in a bowl, be careful to use one pretty large, because it will double its volume, cover it up and put in a place warm and sheltered from the air.

Here it should stay for one hour. The most important thing is not the time that remains there, but that its volume has doubled.

In the meantime, I prepare the tomato. I take a jar of whole peeled or chopped tomatoes and seasoned with salt (not too much, I highly recommend) and the oregano (just to not forget it in the end).
I also cut the mozzarella (1 mozzarella of 125 g for each tray) and I let it to drain from the water.

When the dough has risen well, I turn on the oven to warm it (about 50°C, but not more than that) and when it has reached the temperature, I turn it off.
Next, I prepare the trays with baking paper.

After putting the dough on the work surface sprinkled with flour, I cut it in half (each piece will be about 650 g).
I begin to roll out the first piece with my hands first and then with a rolling pin.

Important! Do not handle the dough too much, otherwise it will become too elastic and difficult to work.

As you are ready, transfer the dough on the tray. Straighten the edges. Then I poked with a fork, so that, during cooking do not make big bubbles.
Let rise it in the oven warm but turned off.

After about 2 hours of the second rising remove the pizzas from the oven and turn oven to maximum temperature.

Then I finish of season pizza, as I prefer.

I have prepared one pizza margherita and olives: tomato, olives, oregano, parmesan, basil, olive oil and mozzarella. Each cheese should be added only the last 5 minutes of cooking.

The second tray is a special one. Special because is the family recipe and also the prefered one.
I’m going to mix all the cheese together (ricotta, white cheese, mozzarella, brie, parmesan) with oregano and no tomatoes.
No oil for this pizza because the cheese is already fat, and during cooking release their oil. Just because they are cheeses, I’m not going to dress now the pizza, but I’ll wait.

When the oven has reached the maximum temperature, I will put both the pizzas in the oven: the red is topped (but without cheese) and the other, the white, no. As soon as the white has made a crust on the surface, I can pull out and season it.

Instead, when the red pizza begins to make the crust and become burnished, it’s time to pull out, put the mozzarella and continue to cook until the cheese has melted. Alternate the position of the two pizza inside the oven, so that they can cook evenly both up and down.

Make sure your pizza is ready in watching it the bottom: it should be a light brown color.

The dough can also be frozen. The portion to a baking pan is approximately 650 grams. Store in freezer in individual portions. Place each portion in a container top, let rise for an hour and then put in the freezer. Remove from freezer and let thaw overnight at room temperature, covered and in a sheltered place. The next morning, roll out the dough on the baking paper and season according to your taste.